Big thanks to Rosaleen Mcdonagh and the cast of Mainstream at The Project Theatre, Dublin tonight, a very relevant socio-political play.
Many layers, many themes, many betrayals, including the betrayal of one’s own body. This play needs to be taken on tour to educate this nation about our collective cruelties, our indifference, our racism and the crimes we perpetrate on each other.
This is a brave courageous work by a fantastic playwright, who has travelled the long road of prejudice. She operates in her own uniqueness and compliments the great work of Christy Brown, Paddy Doyle, the Pecker Dunne and of course Sean O Casey.
While the work is about class, prejudice,Travellers, mainstream society written by a female playwright, it’s literary scope is universal and all-embracing. While disability is also a theme that runs through this work it is extremely intelligently portrayed and given expression of great integrity and is not reliant on any gimmicks or tricks. These are proud people, strongly portrayed by some of the finest acting I’ve seen anywhere. (Donal Toolan, John Connors, Grainne Hallahan and Neili Conroy – cast)
These characters are human beings like ourselves different and equal and their pain is like our pain. It’s a deeply humanising piece and sparks off the idea in us all that we all have a bit of a flaw. We all have our abilities and disabilities. We are all prejudice to one another. 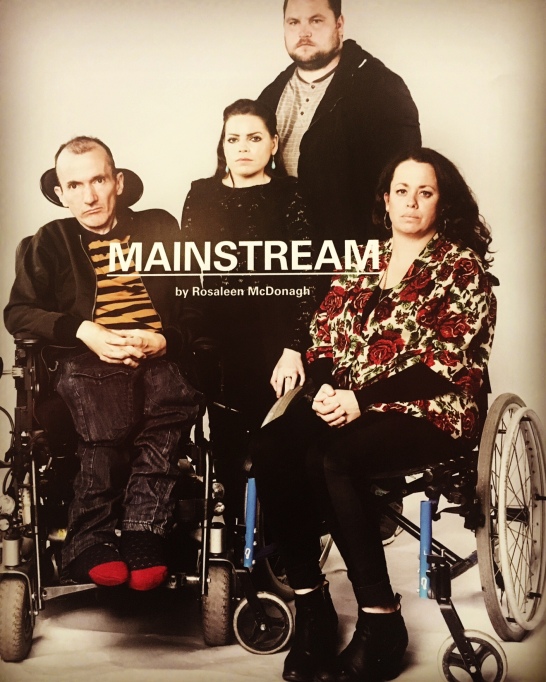 But Rosaleen McDonagh is a great playwright who won’t remain silent and fights that prejudice. Won’t be stereotyped. Won’t be pigeon-holed or marginalised, no matter what. She takes on feminism, male prejudice, class divide, racism, disability, traveller culture, child abuse, body betrayal and gay identity in one great lash of the pen. Excellent.
The centre of the work is about exclusion, prejudice and marginalisation but she manages to bring us as an audience and a public right into her fold.
I felt great coming out of this play even though its themes were dark. This playwright has kicked the door open into the light, and it’s very welcome. Anybody who has any prejudice or any doubts about the Travelling community or any ‘othered’ member of society should get to see this work.
Arts Council, Dublin City Council and all ye people out there with the public purse make sure this play gets out on a National tour – Please – for all our sakes.
This is a work of national importance.
Outstanding honesty. 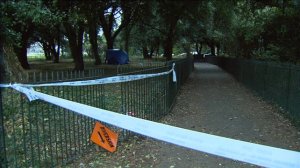 Last night a man lost his life because he was not in the safety of his own home. He is one of thousands forced into homelessness in our country on our city streets.

The homeless executive – part of Dublin City Council, spend in the region of €100 million euros every year on ‘homeless services’. Yet tonight, children and adults will be handed a sleeping bag and told to sleep in the parks. The emergency number for beds is turning people away saying there are no beds and there is great uncertainty. Meantime 600 dwellings belonging to Dublin City Council lie empty as well as hundreds of council houses and flats that are boarded up waiting to be demolished for ‘rejuvenation’ that may never take place.
These residences need to be opened up immediately and refurbished so as people can be afforded their very basic human rights. So what happens the €100 million? How much is spent on fat cat salaries? How many of these so called non government organisations that receive the grants actually spend it on the homeless and ending homelessness?? These charity organisations are simply carrying out Government remits and they employ hundreds of individuals with the money that needs to be spent directly on the homeless. The ‘economy of the poor’, the ‘economy of the homeless’ is solely for the benefit and upkeep of the many agencies that are now falling foul of their original intention and their christian duty. They are in effect ‘poverty pimps’ and an arm of Government and have simply agency captured a lucrative market for their own pseudo sentimentalized, spiritualized culture. The housing of people is not a charity and never can be, it is a fundamental human and civil right. Open up the boarded up houses in our country, cities and towns and give the people a home.

These images above are from a recent protest outside Dublin City Hall regarding the take over of the YMCA at Aungier Street by Depaul Ireland who want to empty the premises of all the current residents so that they can set up their clients in residence there in line with so called Government policy.  At present YMCA accommodates alcohol and drug free male and female individuals who in principal are in recovery programs and abstinence programs from alcohol and drugs.  YMCA’s accommodation units at Aungier Street/Peters Row is one of the safest and productive in the city.  It has the trust of the entire community, an important thing.  That trust is now about to be broken as Depaul Ireland and the YMCA are going to turn this establishment into what can only be described as an emergency wet hostel accommodation.  The stability of the residents that are there at present is now being seriously undermined by these moves and their well being is in jeopardy.  DePaul and YMCA are merely agents of the State at this point carrying out a Government remit having gotten their hands on a substantial amount of tax payers money from the Homeless executive.  I have attended a number of meetings on this issue with DePaul, the YMCA and the residents and have called on them not to proceed with this new regime and practice and to continue with the successful model that has been in operation for a number of years  at the YMCA.  They are breaking the trust of the local community and the residents of the YMCA in order to access funds and build on their own empire at the expense of all.  Please show your support for the residents of the YMCA by contacting the YMCA (paulmcdonald@ymca.ie) and Depaul Ireland (kerry.anthony@depaulireland.org) and Dublin City Council Homeless section or myself (mannix.flynn@dublincity.ie)

I intend in the near future to create a formidable challenge to DePaul and the YMCA  to rethink their strategy in the interest of all.

Tomorrow at the Housing committee meeting in Dublin City Council I will be calling on Fr Peter McVerry to withdraw his name from the process of ‘Freedom of the City’ in solidarity with the homeless of this city and country on the grounds of principal, ethics and morality. Accepting such an award would give an impression that this task of ending homelessness is somewhat complete when nothing could be further from the truth. Many of those agencies who are involved with homeless individuals and families are now in the ‘business’ of merely carrying out Government policy which has done absolutely nothing to address the issues of the many homeless on the streets of our country and the thousands on the city council’s and county council housing waiting lists. Tonight, and throughout the cold winter nights and days, the homeless will be left wandering our streets when the Government and its agents are merely warehousing the problem. Charity is not the solution to homelessness. Homelessness is a political issue that needs to be kept on all the political agendas. It is not the time to be singling out any individual or organization involved in the issues of homelessness for freedom of Dublin city. It is well acknowledged the good work that Peter McVerry has done in saving lives and assisting individuals and we are all very grateful for that but if he was to decline this offer and stand in solidarity with those who find themselves in a hopeless situation that would be greatly appreciated and warmly welcomed and it would send a strong message to those who think to appease the situation, minimize the situation, and exploit the situation with a pseudo gesture like this. This has all the hallmarks of a cynical exercise by an individual politician as we enter into the Christmas season when the poor, the homeless, the disempowered are patronized and further marginalized.