The bullyboys of Dublintown/BID are trying to censor us, close down a democratic right for a NO campaign in the forthcoming renewal scheme for the BID (Business Improvement District).  Hundreds of small struggling businesses are forced to pay a double rate that is grossly unfair.  They have asked me to represent them and create a campaign on their behalf in support of their right to Exit the BID by voting NO to the BID scheme renewal in June/July 2017.

I served on the BID board for two and a half years, so I’m in a strong position to have a valid and honest opinion based on facts.

The members of the company have given me the right to use what they see as their intellectual property – logos, etc, in order to get their message across. That they no longer want to be part of the BID.  They no longer want this company demanding money off of them under legal threat.

These are genuine people who are conscripted into the BID scheme and they find it grossly unfair.  On the other hand, the BID company is an ego trip with a grandiose idea of itself spending large amounts of money on self-promotion while the business district is in shambles and shops are emptying.

It’s a sorry day when public money is used by a private company to try and close down free speech, independent opinion, and democratic process. Dublintown/BID was set up by statute.  Dublin City Council’s Rates Department collect a rate on it’s behalf. It is in fact a public entity and has to be open to full scrutiny and challenges from all of us, especially elected representatives.

We are all too aware in this country of what’s going on in the institutions and the so-called trusted entities.  The BID company – Dublintown, does not have the confidence of the vast majority of its members and that is obvious in their attempts to legally bully anyone who gets in their way and especially those who I support in their right to exit the BID.

Here is the legal letter that I’m putting into the public domain in the interest of openness and transparency.  The submission that I made to Dublin City Council (2 days ago) is protected under the data protection act so it’s extremely odd that my correspondence in relation to this matter to Dublin City Council was handed over to the BID company.

(I will post my submission as a separate blog shortly) 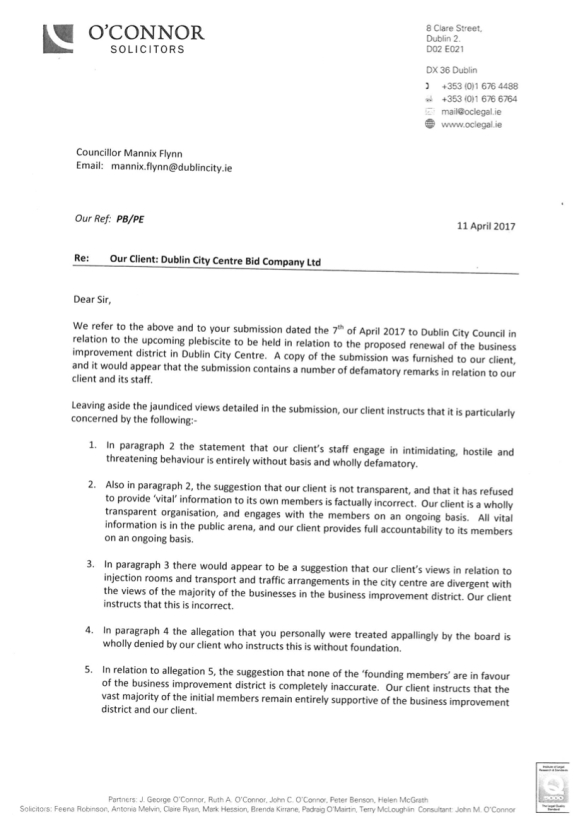 Legal Letter from BID in relation to a submission I made to Dublin City Council.  Where is the data protection?

Earlier today our printers received a legal letter telling them to stop printing posters Cllr for Mannix Flynn on foot of legal threat.  This again is outrageous, underhand and legal bullying.

But I have no intention of stepping back of reneging on the many small businesses who asked for my support.

Join the campaign.  Spread the word.  Call into shops and support the small businesses and not self-serving entities like Dublintown/BID.

NO TO THE BID RENEWAL SCHEME.

Find out more on the No Campaign website     http://www.notothebidcampaign