Today was the final day to raise concerns around the public right of way at Tangier Lane.

To Whom It May Concern,

I wish to raise some observations regarding the proposal to consider the extinguishment of the right of way at Tangier Lane Dublin 2.

In many instants where these orders have been carried out the public are the losers and many of these laneways simply end up as rather unkempt storage facilities for the many businesses operating in the laneways, while the public are met either with an inappropriate iron gate or a wooden gate which has very little aesthetic no relationship to the architecture or shop fronts in the area.

At present, Grafton St and its quarter are undergoing rejuvenation and major improvements.  Special architectural conservation legislation is rightly being applied to these environs and consideration needs to be taken of the negative impact that the closing down of Tangier lane would have on the vision for Grafton Street.  In my opinion, what is needed to combat anti-social behaviour is more public domain management and enforcement through rolling out of more effective community Gardai and an educational process.

Public lavatories and conveniences would go a long way to curtail much of what the users of Tangier lane have to witness as they go to and from work.  The many agencies that dispense needles to intravenous drug users could be informed much more effectively in relation to how much impact their product has when it is dumped in laneways by their many clients.

I note that this request came as a result of the BIDS company and representation to that company by a number of businesses in the area, indeed, I’ve spoken to staff at the Gaeity Theatre and listened to their concerns with regards health and safety.  Those same health and safety issues are evident on King Street as well as on Tangiers Lane.  Is it foreseeable that the next step we’ll be taking will be to extinguish public rights of way in main thoroughfares.

I can well understand the case for residents in residential areas wishing to have laneways at the backs of their houses made more secure from anti-social behaviour and burglary.  The case is somewhat different when it is laneways in the centre of our city where there are few residential populations.

Given that unacceptable social behaviour, the numbers of people who engage in it and where they congregate is on the rise, I feel that this whole issue of extinguishing public rights of way in residential and business areas and in general needs a special consideration

Finally, if this application is successful, I would respectfully ask that in the planning stages serious consideration be given to the gates that would be placed at the entrance of Tangier lane.  That the original old Irish enamel signage (in Gaelic and English) be retained and remain visible at the entrance and protected.  And that this gateway would be opened in the daytime and also within this consideration that a wrought Iron gate would be the appropriate material allowing visibility and the presence of Tangier lane to be retained as opposed to the situation for instance on Wicklow Street and other areas where solid gates have been used to block off completely all visibility of the laneways.  It should also be considered that the laneway not be used for extra storage of barrels and bottles and rubbish etc.

In conclusion, I would like to request an oral hearing in relation to this matter at this particular location. 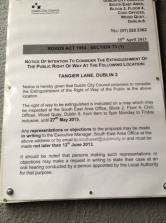