From March 1st-March 5th 2017 Xavier Palet Sabater will set up his exquisite Catalan shop in Dublin at 18 Ormond Quay.  As part of his week-long residency he will be giving a talk on the history of the objects and collectibles along with a workshop (10 persons only) on Saturday 4th March.  See below for details of both.

The talk will start with an introduction to late-19th-century Barcelona to give an idea of the historical and social context that saw the establishment of El Ingenio, a shop specialising in party favours, street theatre and curious miscellanea. It will then take a tour through the story of the shop from 1880 to 1975, focusing on the years around the Second Spanish Republic, when most of the objects in the collection presented in Dublin were made.

In addition to giving an engaging talk that incorporates objects and costumes rescued from the old workshop, Xavier will also deploy his artistic and theatrical skills to present an original performance. 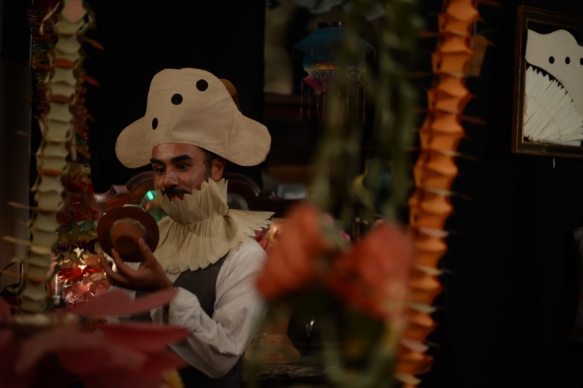 Xavier will also run a 1-hour workshop in which he would teach participants how to make different styles of paper hats.

The group would be maximum 10 persons

Participants would need to pay €10 to cover the cost of materials.

Participants should bring their own scissors ✂

Please email: farcryproductionsltd@gmail.com to book your place.  (Only 10 places available)

Xavier Palet Sabater was born in a small town in L’Empordà, Catalonia. In 2000 he embarked on an artistic career restoring antique furniture and artwork while managing his workshop and the Kamerino shop in Calonge. Since 2007 he has also worked in the field of performance art and theatre, designing, directing and performing his own work at a number of festivals. In 2016 he launched the Kamerino de l’Enginy project in Barcelona.

Tim James Morris grew up on the south coast of England to a family with Welsh roots, but has lived for the last 15 years in Barcelona, where he translates for art exhibitions, festivals and other cultural events.